Understanding Bipolar I and Psychic Mediumship Ability: One Patient's Experience, A Blog Post 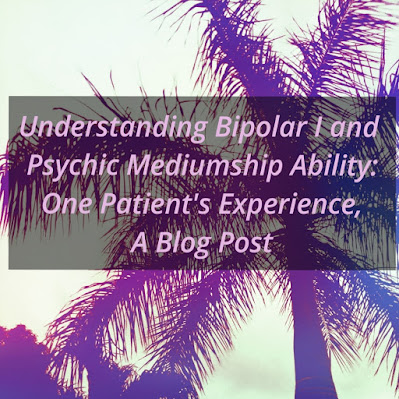 Understanding Bipolar I and Psychic Mediumship Ability: One Patient's Experience, A Blog Post

I have a story to share with you. I'm a Psychic
Medium. I'm 97% accurate in my abilities.
And I have Bipolar I, which is Bipolar with a psychotic element. This type of Bipolar not only has High and Low Moods, i.e. mood swings, it has a diagnosis that says the patient has had at least one psychotic break before being diagnosed with the mood disorder.

I had a psychotic break 15 years ago. I also had euphioric highs and deep depressions. My depression was so deep I was put on antidepressants by my primary care doctor as I didn't know I had Bipolar II.
During my psychotic break I thought I was using psychic abilities. I had hallucinations, visual and auditory. I thought I was communicating with actors and talk show guests through the Television. I thought I had telepathic communication with the man I loved in another country.

I was put on medication after this break and now I'm on less medication then I started out on all those years back.

Two years ago, I embraced my true psychic abilities again.

My Mom pulled through her illness. The man I love has stopped communication with me in life. I consider myself in a Twinflameship. It's like a relationship, but there is much that happens psychically between the two people because the two people are in seperation. I feel we communicate in the dream state. I don't know if anything will happen between us anymore. I just know I feel connected to him still.

My Grandma passed away in February 2021 from Covid. The disease was still raging and she couldn't be buried until a week later. I communed with her all week. When it came time for the funeral, it was held on Zoom.

Before it started I had this feeling that I needed to clean up the space where I usually work in. It's away from my parents space. Its like a den area open to the other part of the living space.
Some relatives that passed in the year before, visited me and told me to sweep up the space. One said "You know, you're going to have to come back and clean more up later".

I didn't think much of it, though he was very stern with me. It was unusual because when I knew him, he was so relaxed and in a pleasant mood.

My Dad insisted on watching the Funeral on Zoom on his own device. The funeral began and me and my Mom had to go to the other space I just cleaned up to watch the funeral since there was feedback from both devices playing in the same room. The funeral was the perfect send-off to a legend, my Grandma.

I'm still in awe of what took place.
My Grandma was always on us about our health. My Grandpa died of complications from Diabetes as have other members of my family. She always wanted us to stay healthy.
I feel like she was looking out for us. Not only because we could develop infections from stepping on the glass, but that we could all do better in managing our Diabetes.

I still commune with my Grandma. She gives me advice on life. My Grandpa is my Guardian angel. He and my Grandma watch over me and the rest of my family.

Though I'm still grieving her loss, I know she is with all her family and friends who have passed. She is also with the love of her life. She is in Spirit and yet has a new life on the other side.

There are people who treat my mental illness and don't believe this story.

They don't believe me when I talk about my Twinflameship and that I recieve messages about my twin flame person and have confirmation it was real. Even when I tell them I recieved a channeled message from my Twinflame person before bed time. And that the next day an article popped up on my Social Media Timeline written by a man who had the same problem in a relationship that my Twinflame just experienced in one of his old relationships.

They don't trust that during my psychotic break my experience was brought on by my quitting an antidepressant completely without tapering off the pills with a doctor's supervision which caused me to have a drug trip.

They don't know I've had psychic ability all my life. But it was blocked until 2 years ago because I shut my heart and soul off from trusting in a higher power.

Here's what I know.

Do you have a mental illness and psychic mediumship ability? 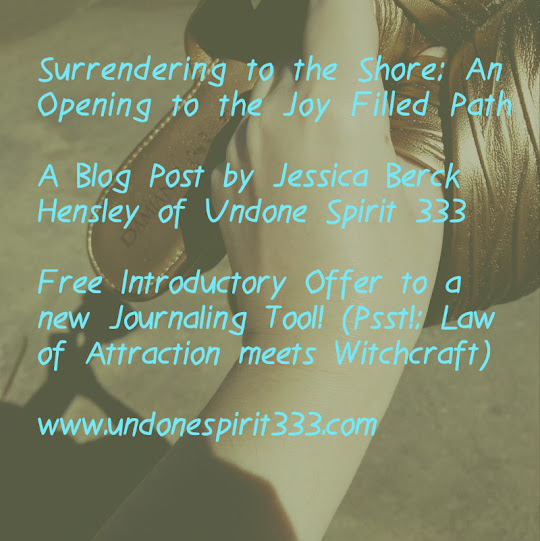 I now accept tips for my production of content

Hello everyone, including crystal friends : ), I now have a paypal.me link for you to send tips if you find my content helps you. I call it sending a 'Resonation Donation'. I feel like it sums up how I feel the energy exchange is from me to you and from you to me when it comes to any transactions between us. I put this here because I'm now doing Tarot Readings again on YouTube. My podcasts are more of a public service. My Tarot Readings are also free, however I see them as entertainment, as if I making a show. People who create shows often get paid somehow. My link has my old account name, sketchwriterjess. This is my paypal me account. I have to figure out how to change it but until then, this works. I still am sketchwriterjess on the inside being read aloud here on Undone Spirit 333. : ). Thanks for listening. Take Care, Jess

If you'd like to make a Resonation Donation i.e. a tip here is my paypal link. 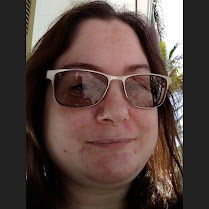